If you are a professor or graduate student of philosophy, theology, psychology/cognitive science, or religion contact me to get a free e-book copy.

06/01/21 If you purchased my book and wish to get personal instruction on my metaphysical persuasion (Absolute Realization) use the contact form to get 2 free months of e-mail instruction directly from me. 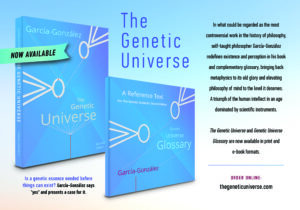 Regarding the Book’s Edition

The Genetic Universe can be summarized as: “What is likely to happen when someone has good ideas in metaphysics but is not affiliated with any university and lacks pertinent knowledge about designing, editing, publishing, marketing, and selling a written work.”

In 2015, I wrote a short book which I believed was basically well written and self-published it.

At such time, I saw no problem in not having discussed the work with anyone; I approached a number of individuals but had no luck in getting anyone’s attention and so decided to post it online for a limited time as a free e-book.

I found out posting a book online at no charge is a bad idea if you have the intention of selling it later, since the book started to appear in places I did not want it to appear.

Later, I was made aware most readers would not understand my book, as English is not my first language.

When I finally got editing help, I began to find out the large gap between what a publishing house does with a book of such magnitude; utilizing a team of various professionals to cover every significant angle, and the basic fixing of grammatical errors you get from hired editing.

Those details explain why you find a second edition here; the first edition is gone, nowhere to be found.